When it comes to EPM.

We worked with a team of veterinarians and researchers to create tools to assist you in identifying Equine Protozoal Myeloencephalitis (EPM). The sooner EPM is diagnosed and appropriately treated, the better the chance of recovery.

Get started with convenient tools to help you identify EPM.

Have you completed an Online Neurological Exam?
YESNO

Download our STALL Sheet to help explain the signs of EPM to your clients.

EPM is a protozoal disease that causes inflammation of the brain and/or spinal cord in horses, leading to various degrees of neurological deficits. This neurologic disease was first described in 1968, and was associated with a protozoal infection and given its name in 1974. Sarcocystis neurona was confirmed as a causative organism in 1991 with Neospora hughesi recognized as a less common cause of disease later that decade. Both S. neurona and N. hughesi are obligate intracellular parasites that require two different hosts to complete their full reproductive life cycle. The definitive host of S. neurona is the opossum, with the skunk, raccoon, armadillo or cat all being potential intermediate hosts. Horses are infected with S. neurona when they ingest food or water contaminated with opossum feces. The full life cycle of N. hughesi has not been determined, but it does appear able to be transmitted transplacentally in the horse.1

EPM is predominantly a disease of North and South America. Like many other animal diseases that are affected by environmental influences, some regions of the country have a higher incidence of the disease than others. The seroprevelance (meaning they have been exposed to the disease determined by blood tests (serological tests) that may not being showing signs of disease) of S. neurona in horses from the United States varies widely from as low as 15% to as high as 89%. It is lowest in cold or arid places, generally where there are not opossums.1 The seroprevalence against N. hughesi is lower at 3-34% but without regional differences.1 Fortunately, less than 1% of exposed horses have the parasite eventually enter their central nervous system to cause clinical disease. It is likely some combination of both horse individual immunity, environment, and parasite factors that combine to determine which horses will develop clinical disease. What we do know is that horses develop clinical disease more when they are stressed (shipping around in trailers, competing at shows or participating in events) or have other illnesses.1

IMPORTANT SAFETY INFORMATION: The safe use of MARQUIS in horses used for breeding purposes, during pregnancy, or in lactating mares has not been evaluated. In animal safety studies, loose feces, sporadic inappetence, lost weight, and moderate edema in the uterine epithelium were observed. For use in animals only. Not for human use. Keep out of reach of children.

Regional sero-prevalence of healthy horses in the United States2 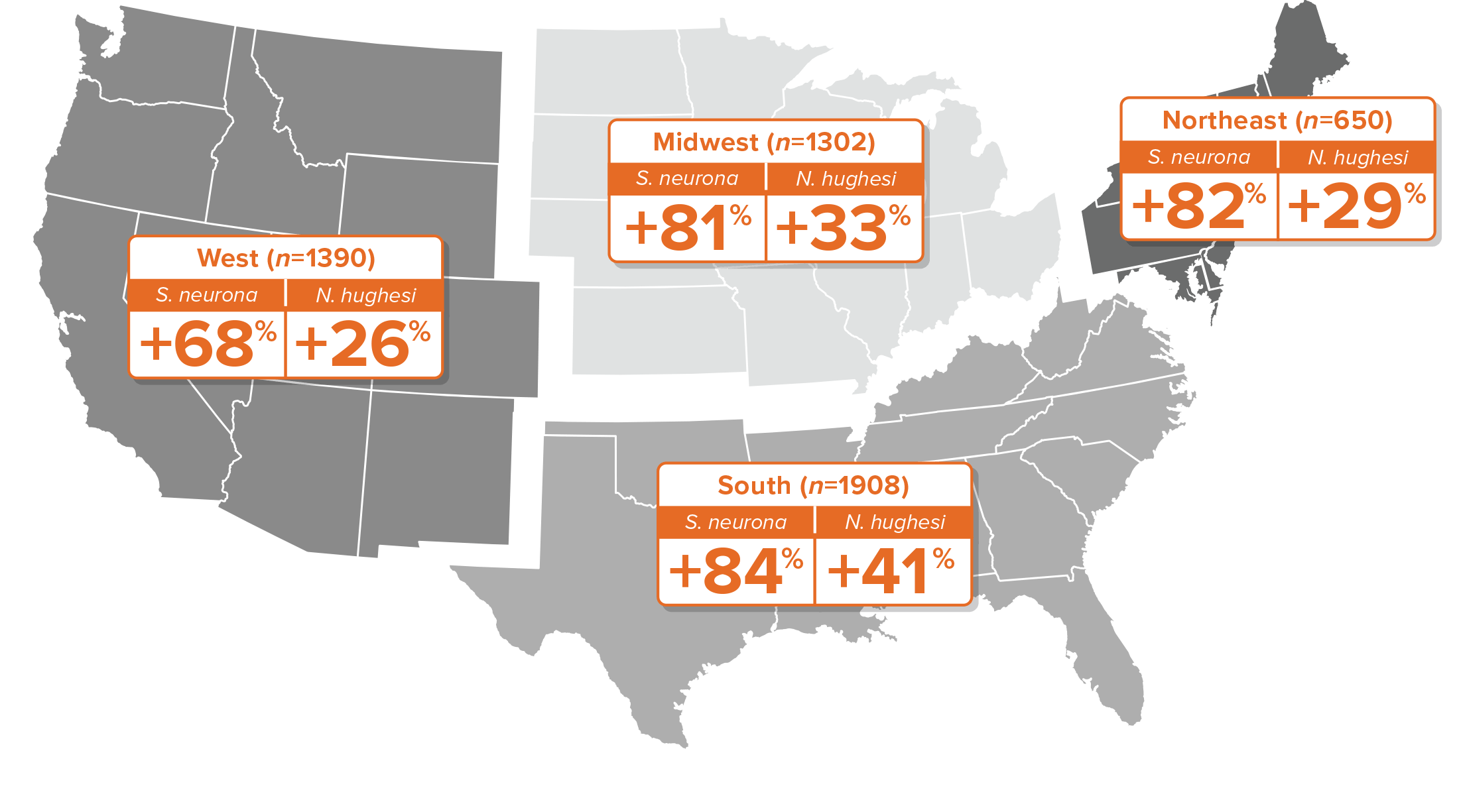